Shoes On or Off: What’s The Rule In Your House? 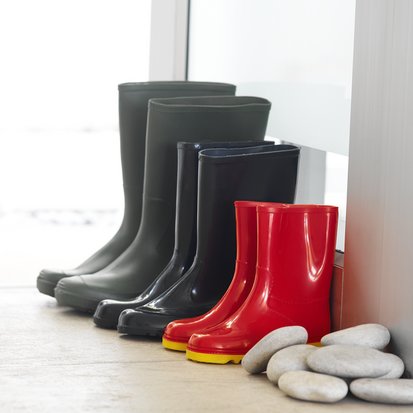 Is It Wrong To Make People Take Off Their Shoes When They Enter Your Home?

I just read a post on this topic on the HGTV blog that was funny but a little surprising at the same time. I know I always take my shoes off but not everyone sees it that way. I’ve always been taught to take off my shoes when I enter any house – mine or anyone else’s.

The writer, Krystal, talks about her experience of going to a friend’s house and, before being allowed to go any further in the home, having to stand on a square piece of paper towel so she can take her shoes off. Talk about OCD!

Click here to read: House Rules: Shoes On or Off?

Most people agree that taking off your shoes is normal but not to the extreme of that home-owner (I hope). She does bring up an interesting question later on in her post though: What if you forgot something on the kitchen counter and it was just 10 steps from there to the door, would you take your shoes off then? I know what my wife would want to say – “Yes I absolutely take my shoes off!”

But if I were living on my own? I don’t know. I may be tempted to just across the floor with my shoes on. I can always (Lysol) wipe it later.

I understand where that mom was coming from though. I mean, you wouldn’t want someone to bring all the dirt and germs from outside, inside the house right? There’s a whole smorgasbord of delightfully gross things out there in the world. Bacteria, dirt, garbage, and when nature calls you don’t see dogs “holding it” until they can find a toilet.

In fact, just recently a “study published in the journal of Environmental Science & Technology found that toxic coal tar, a known carcinogen used in driveway sealants (among other places), is tracked into homes from driveways and parking lots.” (via Dr. Frank Lipman’s blog) That among other studies is even more reason to ask people to take off their shoes. And If you have pets and/or young children I would physically block people from entering inside the heart of your home with their shoes on.

Some People Find It Perfectly Normal

A few years back, my then-fiancée had family over and they obviously had a different view on the whole “shoes inside the house policy” that me and her family were used to. As soon as they walked in the house they keep walking past the little foyer where you’re supposed to remove your shoes, and walked straight into the house.

Oh boy did that cause a bit of a scandal.

On one hand they were family and we are very fond of them so we didn’t want to offend them, on the other hand it made us cringe every time we saw them walking around in the house with their shoes on?

My wife and her family felt that it was a little disrespectful but didn’t want to bring it up because they were family. Luckily, after a couple of days it clued into them that we were taking off our shoes and they weren’t and so they started taking off their shoes too. But it sure was a little uneasy those couple of days.

Reasons to Take Off Your Shoes Before Entering A Home

Ever since I was young I’ve been told to take off your shoes before entering a home – mine or anyone else’s. It made sense absolute sense to me, I mean you wouldn’t want someone to bring all the dirt and germs from outside, inside the house right?

See what I mean? http://www.hgtv.ca/blog/wearing-shoes-indoors/

But according to some recent research, there’s now solid evidence to back up those who are pro-“shoes off”. This info is via Dr. Frank Lipman:

You really should read the whole article on his website. Click here to read the full article on the Dr. Frank Lipman site.

Most people I’ve come across have the same feelings I do on taking off your shoes before walking inside the house, however, I did have a situation once where out-of-town family wore shoes in the house. It was a bit of a tricky situation to say the least.

Read more about it here: Shoes On or Off: What’s the Rule In Your Home?

So I’m curious, what’s your shoe policy in your home? Are you a Shoes On or Shoes Off person? And what if you were wearing boots or other footwear that was hard to put on? What if you were in a rush?

Also, read more about scientific reasons why you should take off your shoes before walking in the house.

Scrubbi in the Ottawa Metro!
How To Choose A Move Out Cleaning Service